LAS VEGAS, March 5, 2018 /PRNewswire-iReach/ — map.healthcare today announced the launch of its website and app that provides targeted geospatial search, analytics, and insight into physicians, hospitals, pharmacies, payers, patient populations, economics, and other healthcare data.  The app is free to use at https://map.healthcare/ for analytics and the creation of heat maps, allowing users to drill down from country to specific places and neighborhoods.

“I believe that map.healthcare has the potential to change the way people interact with and understand healthcare data,” said Brendan Kelleher, Chief Data Scientist of karmadata.  “karmadata has the largest repository of linked healthcare, population and economic data, with billions of records processed annually.  Now for the first time, we have a platform to release this data to the millions of users interested in understanding macro and micro trends in various geographical markets.”

map.healthcare was created in partnership with karmadata and TwinStage.  karmadata is a cloud based platform for data, providing public and private repositories, APIs, natural language processing, machine learning, and artificial intelligence.  The karmadata platform is used to process billions of transactions a year.  TwinStage provides authentication, authorization, user management, and freemium subscription and billing as a service to API and app developers worldwide.  TwinStage provides all the server side features that app and API developers need via a cloud based platform, freeing creativity and productivity.  Learn more by visiting map.healthcare, karmadata.com, and twinstage.com.

The 2018 HIMSS Conference & Exhibition, March 5–9, 2018 in Las Vegas, brings together 45,000+ professionals from around the world for five days of education, innovation and collaboration to help uncover the promise of health information and technology. No other conference brings you the world-class education, cutting-edge products and solutions, and unique networking opportunities you need to solve your biggest health information and technology challenges – all at one time, all in one place. Choose from 300+ education sessions, 1,300+ vendors, hundreds of special programs, and endless networking events. HIMSS18: Where the World Connects for Health.

We are pleased to announce some exciting new features just released to our Sponsor Finder app.  We have expanded the search capabilities for clinical events, enabling you to search among 10 different events in the clinical trial timeline.

With the new Clinical Trial Events search box, located at the bottom of the search options, you can select one or more of the available options which include:

#dataShows there are 4.2k investigators actively working on cancer trials 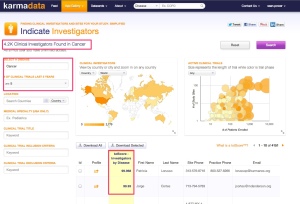 All these investigators have run trials in the last 5 years.

Each week the editors of karmadata choose a Datacard created by one of our members, to recognize their creativity and contributions to the world’s open knowledge base.  This week’s Datacard visualizes clinical trial data for a popular biotech company (Gilead) for one of their development programs (Hepatitis C).  We copied this card (using its filters) and stamped out ~10 other Datacards, learning about Gilead’s drugs, clinical investigators and more in the Hepatitis C arena.  Great work!

Data has meaning, and should inspire ideas and action, the same as words can and often do.  Those meanings should be clear and easy to find AND understand, by anyone, anywhere in the world.  Society needs to encourage and adopt a data-driven approach to everything, from the impossibly complex (think global warming or healthcare costs), to the commercial (efficiently targeting your customer base), to the much enjoyed social (debating your friends and colleagues on Twitter, LinkedIn or Facebook).  Everyone knows “a picture says a thousand words”; well so do facts, and more so facts that have been attractively visualized and easily shared.  In a world where we are inundated with marketing messages touting the use of “Big Data” and “Open Data”, sharing and visualizing data seems like no-brainer.  If only that were true.

You see, there is a dirty little secret that the Big Data vendors and Open Data zealots won’t tell you, but we will.  Big Data is not open, and Open Data is just as closed.  What’s that you say?  It seems plausible that certain piles of Big Data are not open to the public, think patient health records, or detailed banking transactions.  We call this the Big Data Anonymity Problem, and we think we have a solution for it (more on that later).  But how can Open Data not be open?  I mean the word open is in its title!

This is where we reclaim the true meaning of the word Open as it relates to Data.

I am sick and tired of the wrong headed association of the word Open with Free.  Let me set the record straight: nothing, and I mean absolutely nothing, is free.  There is the appearance of free.  Google seems free, but you are trading information about yourself to advertisers in exchange for the best search engine in the world, and let’s face it when you need to find a restaurant when traveling, you don’t care about the nuance.

Downloading data from the U.S. Government seems free, but every time you open your paycheck, take a look at that hefty federal and state tax that is paying for the collection and dissemination of data (the National Library of Medicine has spent $3.2bn over 10 years in publishing Public Data, and that is just one example from the U.S. government, there are thousands of other examples from the U.S. and around the world ).

None of these examples are free, they just employ different revenue models (advertising, donations, taxes).

You see, in order to do a technology thing right, it takes resources, and lots of them. Programmers are stubborn like that, they need to get paid (yes, they have mortgages, and college tuitions, and car payments just like you and me).  And last time I checked, the folks at Microsoft, Oracle, Dell and HP aren’t starting to give away their software, servers, storage arrays for the common good!  And while the marketing guys keep laying it on thick touting the “Cloud” (doesn’t it sound nice and fluffy?) the actual data centers and hardware that make the “Cloud” go aren’t going to be free any time soon (like ever).  Read Richard Stallman’s (see GNU project and Free Software) take on this when he says,

I love this quote. Richard and I diverge on the best way to fund technology innovation, but for sure his heart is in the right place.

I also reject the Open Knowledge Foundation’s interpretation of the word Open, partly because of their improper association of the word Open with Free, but mostly because what they are really talking about is Public Data – and Public Data does not always meet my definition of Open (see below).  At some point someone in a meeting decided to replace the word Public with Open, and that was a mistake.  Public Data really says it all: it is data that is owned by the Public because it was (wait for it…) PAID for by the citizens.  Any government or regulatory data falls into this category, anywhere in the world (there are some economic ethical issues around one country’s citizen paying for another country’s access to its data, but that is a topic for another blog post).  Public Data also includes any Private Data whose owner decides for one reason or another to release or publish to the Public (think press releases or public domain websites).

Taking Back the Word Open as it Relates to Data

In my book the word Open, as it pertains to Data, means:

And Public (sigh “Open”) Data fails miserably on most, if not all, of these points.  Some Public Data is better than others, but few are great and none are linked to each other.  I started karmadata to help fulfill the promise of Open Data (and Big Data…and Private Data!).  Stay tuned, another blog post is coming on that pesky Big Data Anonymity Problem and our ideas on how to open private data up. 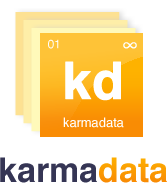